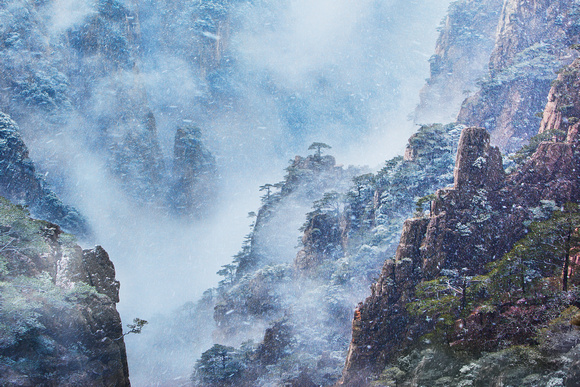 This image was made in one of these three beautiful mountain areas: Huangshan. An unexpected snow storm suddenly arrived in West Sea Valley in the later afternoon on 22 Jan 2013. It was very cold and the storm was so strong especially in such an open location. Everyone left but I decided to stay a bit longer. The storm only lasted 15 minutes. By the end I was glad to be able to make this image under such extreme weather condition.

This photo has been published on 1X. It has also won 1X Curator's Choice Award.

On 25 December 2013, this photo was further selected to the finalist in "Memorial Maria Lusia International Mountain and Nature Photo Contest - 24 Edition 2013".

On 4 February 2014, I was informed that this photo has received "Highly commended mentions" in the category "mountain Landscape in the 24th Memorial Maria Lusia International Mountain and Nature Photography Competition.

On 3 October 2014, this photo has been selected in the finalist of Outdoor Photographer’s Vistas Photo Contest.

On 14 June 2015, this image has been selected as the Image of the Day on the prestigious Nature Photography website Whytake.
© Yan Zhang Photography
Powered by ZENFOLIO User Agreement
Cancel
Continue