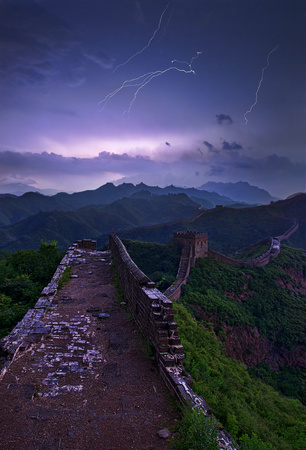 It was an unforgettable night at the West Tower with Five Holes at Jinshanlin Great Wall. Severe thunderstorms and lightning just came suddenly, and the tower was my only shelter during the whole night.

This photo was taken at the night of 4 August 2013 in the tower. As it was raining together with severe thunderstorms and lightnings, I could only take photos through the arches and windows of the tower. Both the foreground and background of the great wall and mountains were greatly lighten up by a series of lightening that made them clearly visible.

This image was a result from blending four shots with the same composition, two for the foreground, background and sky that were lighten up by two separate strong lightnings, and two captured the three major lightnings as showed in the final image.

The West Tower with Five Holes (西五眼楼) was built in 1599 with a masonry structure. It once had an important geographic position in the old time due to its connection of the both east and west sides of Jinshanlin (金山岭）Great Wall.

This photo was selected as the Editor's Choice in 500px. It has also been published on 1X.
© Yan Zhang Photography
Powered by ZENFOLIO User Agreement
Cancel
Continue