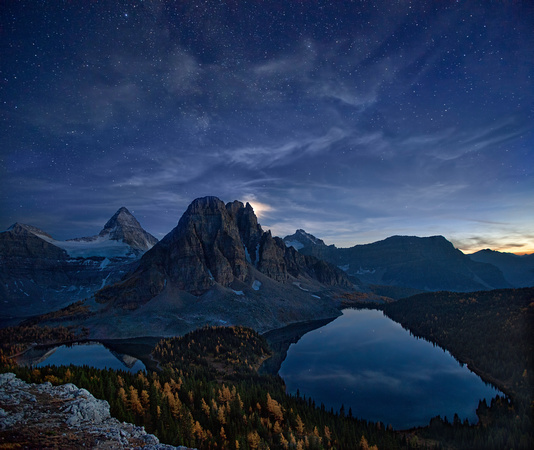 This image was taken on 21 September 2012, in Mount Assiniboine, Canadian Rockies. A dramatic sky appeared over Mount Assiniboine: after sunset, the rising moon was hidden behind Mount Sunburst while its light was burst from the peak, and moving clouds crossed the starry sky and formed such magic patterns.

Others comments on this image (from Photo Net):

"A superb night image Yan! Unless I miss my guess you shot this from the Nub? Must have been a fun trip down from the Nub in the dark! That's dedication to the art! The post processing is superbly done! Congratulations on an outstanding image Yan.
All the best,
Neil"

This photo has been published on 1x. It has also been selected to be published in 1x new book 2013 Landscape Tutorial Book. This image has been uniquely viewed over 120,000 times by July 2013 since it was published on 1X in November 2012.
© Yan Zhang Photography
Powered by ZENFOLIO User Agreement
Cancel
Continue