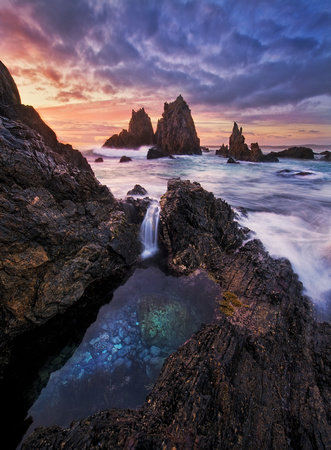 In the last few days of 2014, Yun and I undertook a 3-days trip to the south coast of New South Wales.

For the first time of visiting this place, I was lucky enough to have got two out of three mornings with spectacular light. This image was taken on 28 December 2014 morning.

By exhaustively searching the location, I discovered this tiny water pond on the rock stack, which presented an eye-catching contrast with the outside ocean scene. However, the ocean and the pond were somehow detached, while the only way to let them meet together was patiently waiting for the high tide that created such "waterfalls" during the magic time period ...