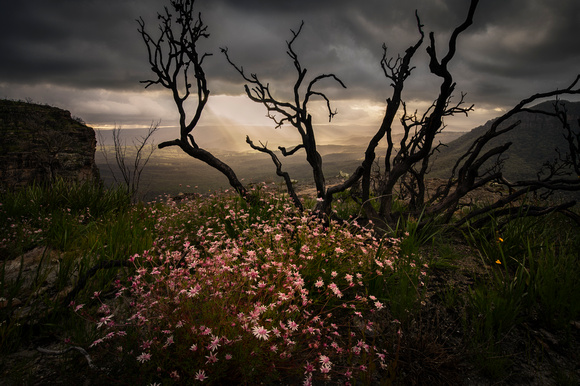 Pink Flannel Flower, the generic name Actinotus forsythii, is a very special plant. In general, pink flannel flowers only occur in scattered parts of eastern Australia, from the Blue Mountains to north-eastern Victoria. They favour heath and open forest areas at altitude, mostly near the cliffs and ridges. While not endangered as a species, they appear so infrequently that many bushwalkers have never seen them. The seeds can lay dormant for up to 40 years on end, waiting for a special confluence of events forming the right conditions for their emergence – a year or so after bushfire followed by an early spring rainfall, which is exactly what the flower’s home turf experienced last year.